Overall VFX Supervisor Richard Stammers and MPC VFX Supervisor Patrick Ledda oversaw MPC’s teams, made up of more than 1200 artists and production crew, to deliver 1150 shots for “Dumbo”, over the course of two and a half years.

The film was primarily shot at Pinewood and Cardington studios and MPC’s initial involvement was to assist and provide guidance to the Production VFX Supervisor and Producer.

The work on set varied greatly due to the large number of scenes and nature of the work that MPC was involved with—from blue screen set extensions to overseeing shots related to character animation and second unit shoots. Of particular interest was working on the motion-base shoot, for which animators created animation cycles that drove the motion base. This allowed actors to ride the motion base and subsequently integrate them with a CG flying Dumbo.

MPC began by working with Tim Burton to create concept art and designs for Dumbo’s world. MPC’s VFX artists then started working on the creation of CG characters and animation cycles. Its Character Lab team created several characters, including the film’s hero character Dumbo, which took more than a year to develop—although some initial tests at Disney started earlier. From the overall appearance, to how he would physically move, it was both a challenging and creative process. The main challenge was how to get the balance right between what a real and an idealised elephant looked like. MPC wanted to reference the original cartoon as much as possible while working with more realistic attributes.

For the other elephants, the director’s vision was that they would be visually attractive, healthy specimens. This meant they shouldn’t be too dirty, wrinkly or hairy and have an attractive build. Several months were taken working on the desired look, using huge amounts of reference material.

Another iconic character MPC crafted was Dumbo’s mother, Mrs Jumbo. Artists used adult Asian elephants as a reference, researching online videos, as well as going on shoots at various zoos to study them in more detail. The team focused to a great extent on creating a realistic looking elephant with complex textural and wrinkle detail.

MPC R&D developed a key technological advancement for this project: the creation of a resolution skin simulation setup that allowed artists to simulate individual wrinkles on the elephants in detail. This, in turn, allowed the team to mimic the complex dynamic effect of pulling and stretching wrinkles as the elephants walk and move, resulting in skin meshes that are up to 10 times more detailed than any MPC had created in the past.

MPC also worked on secondary characters, including Barrymore the Capuchin monkey, mice, a python and other additional background animals. Digi-double versions of Joe, Milly and Colette were also created for use during complex flying shots where there was no motion-base element.

One of the standout sequences in the film is when Dumbo is given a bath. The most challenging aspects of the scene were how to create and simulate realistic bath foam—Burton wanted to use the foam as a representation of Dumbo’s mood, so significant creative control was needed. The final result was a combination of computer generated and practical foam which was shot at MPC. 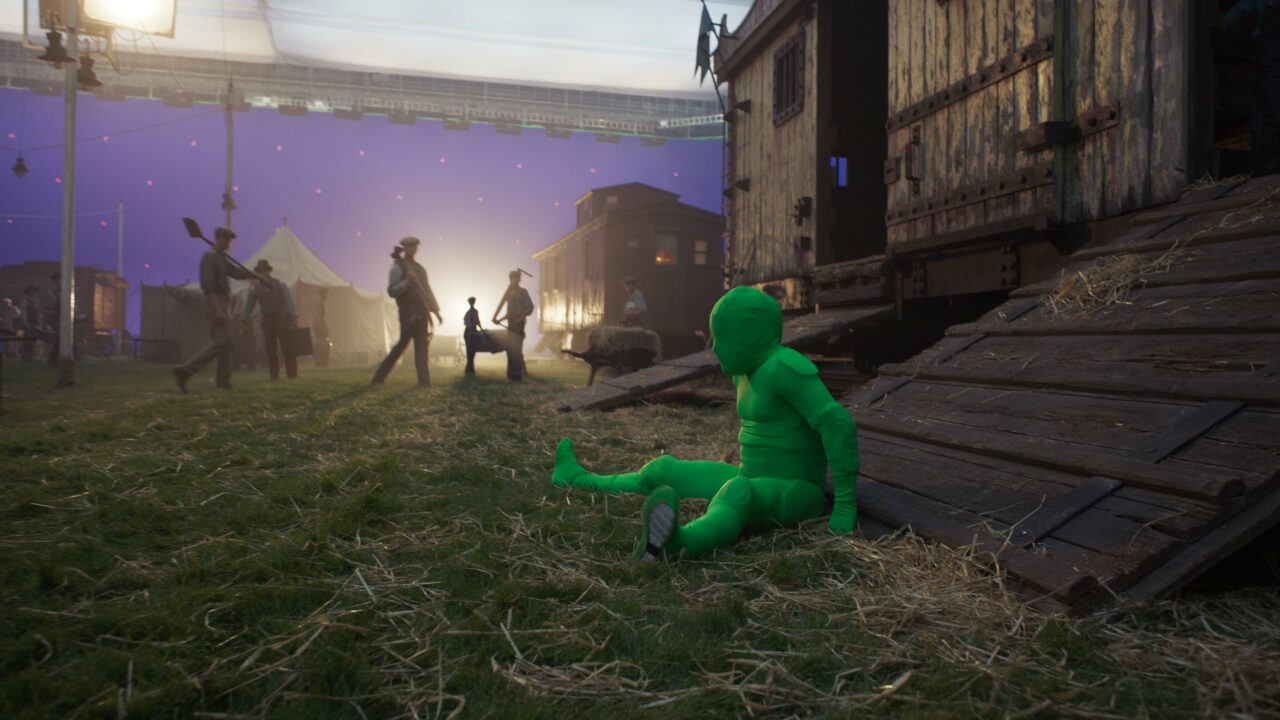 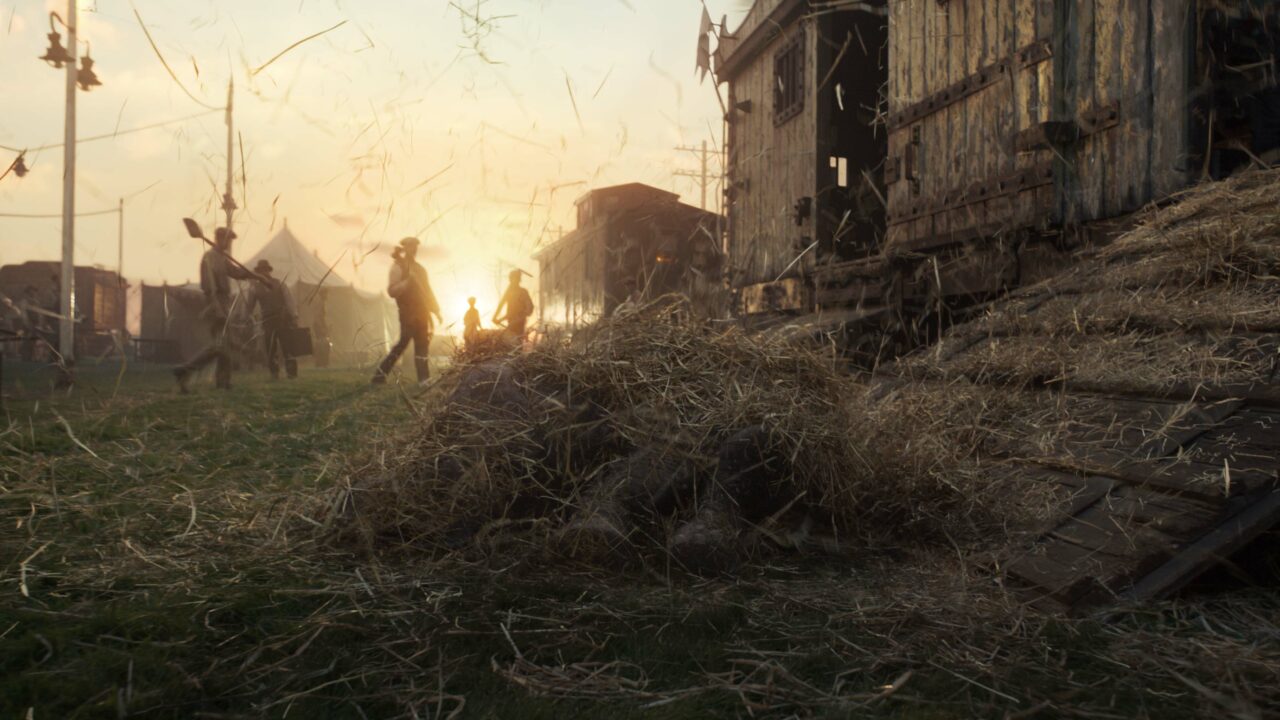 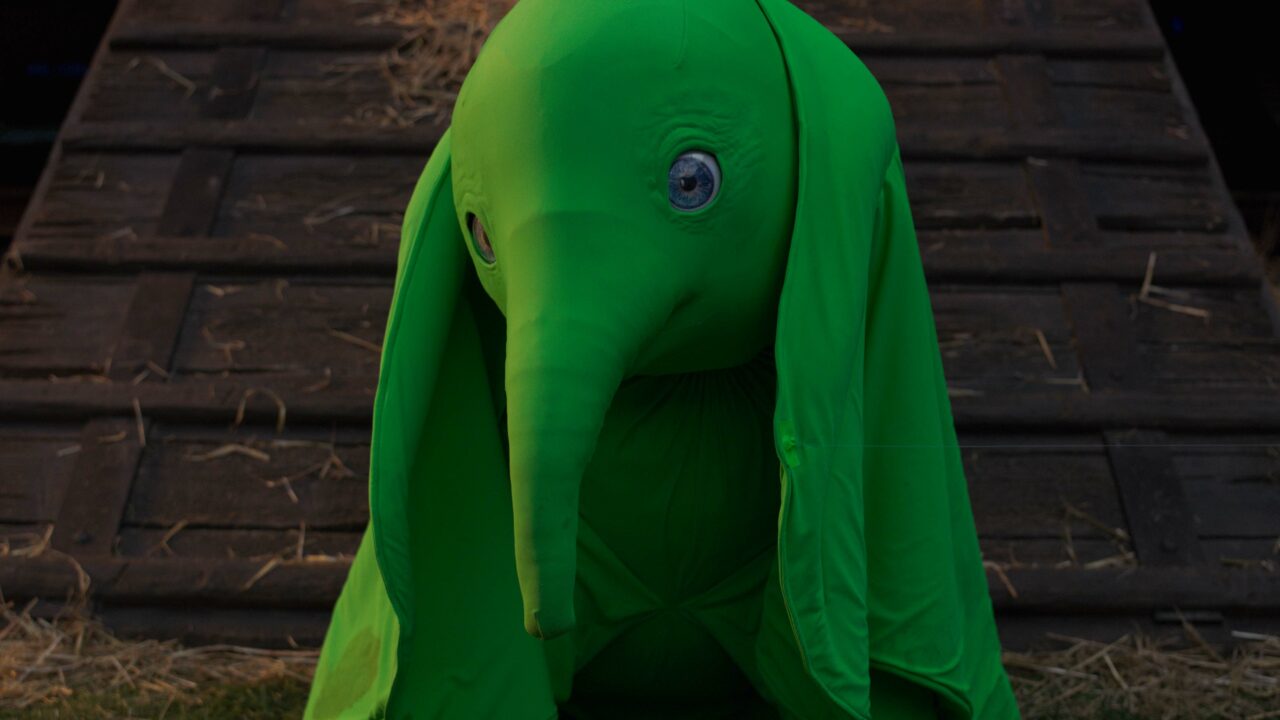 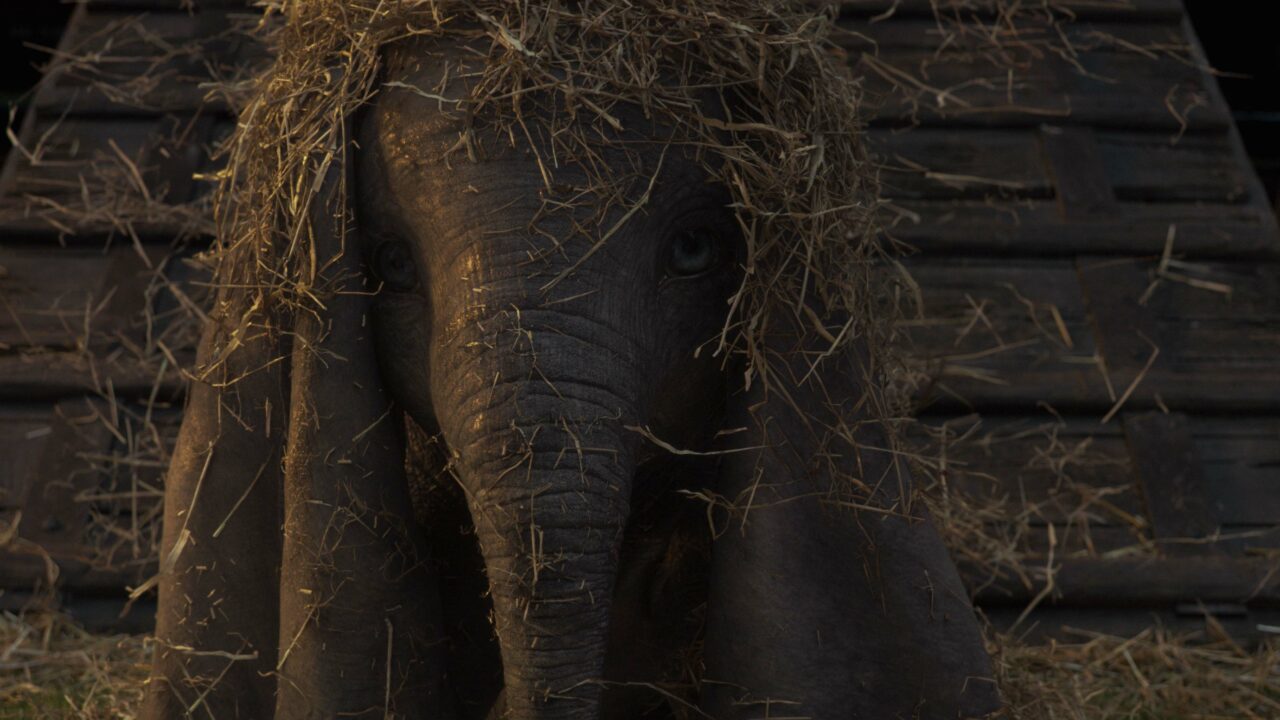 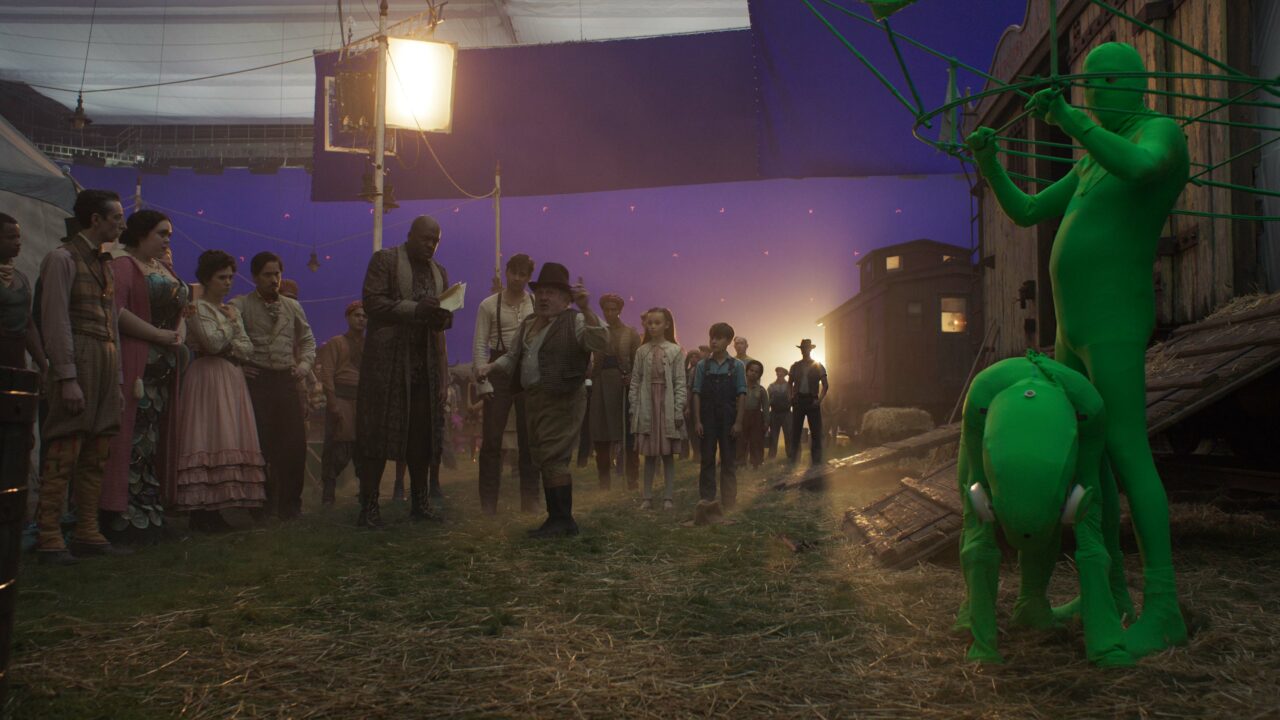 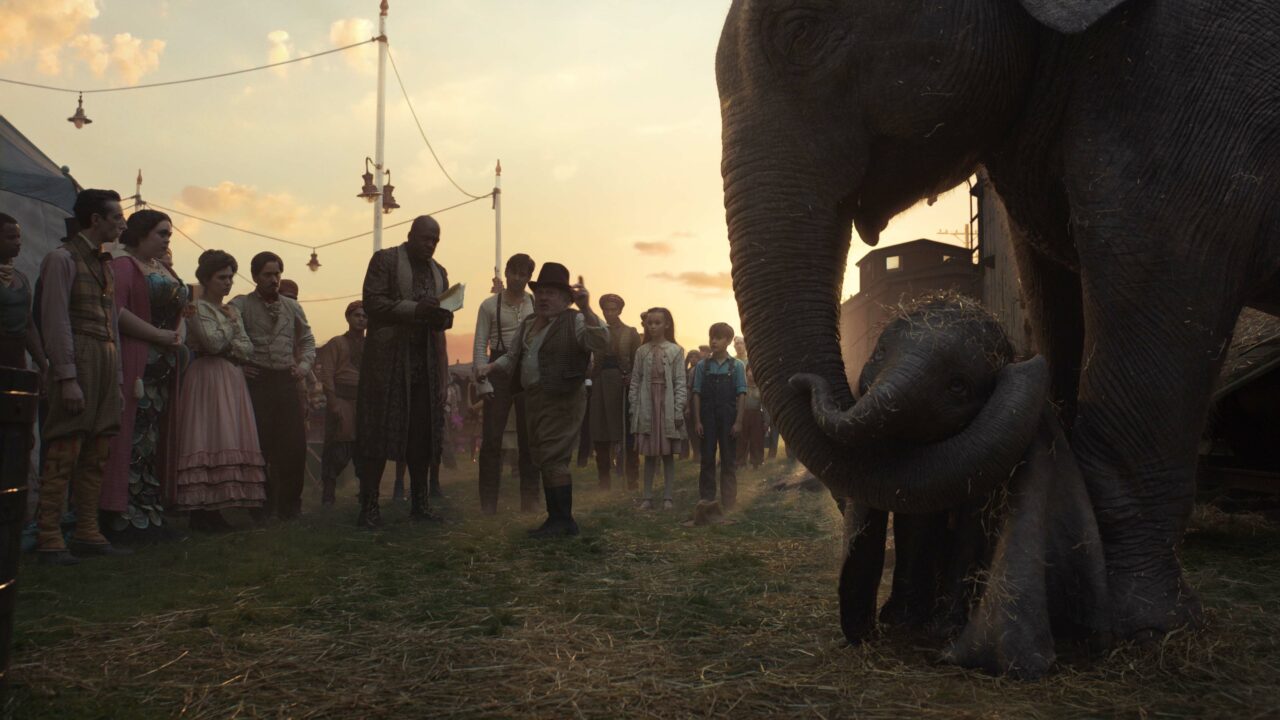 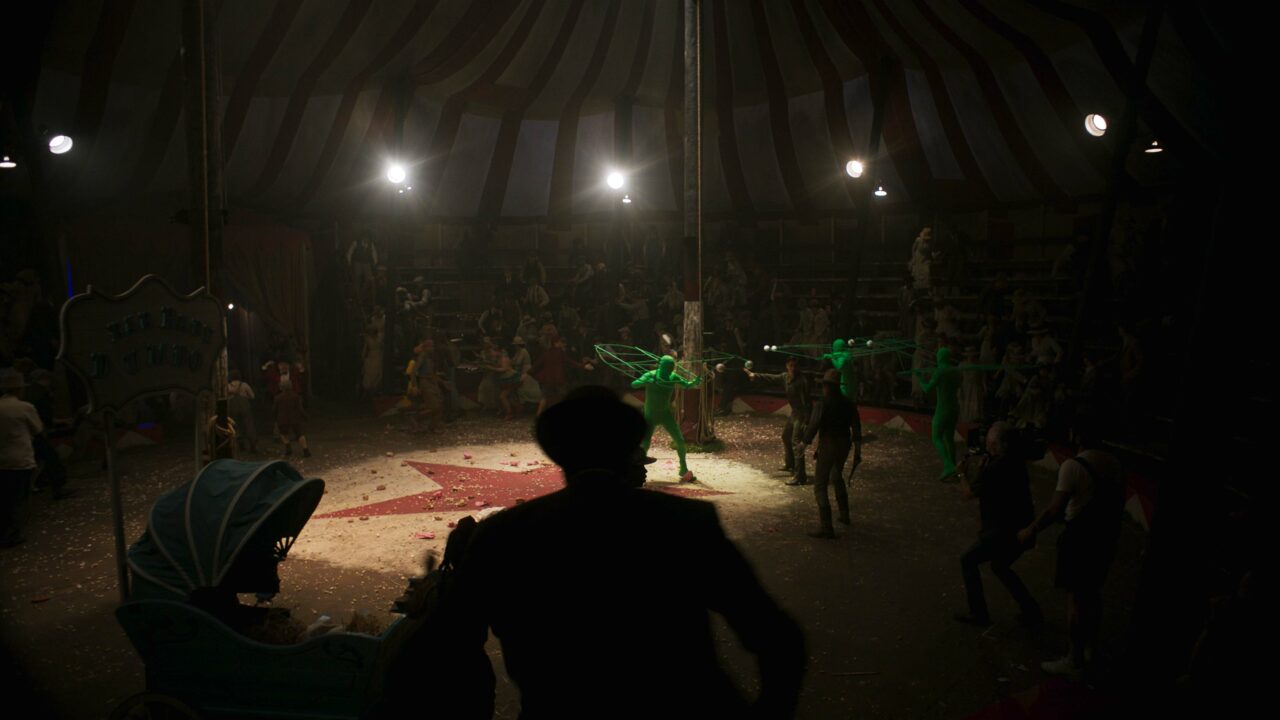 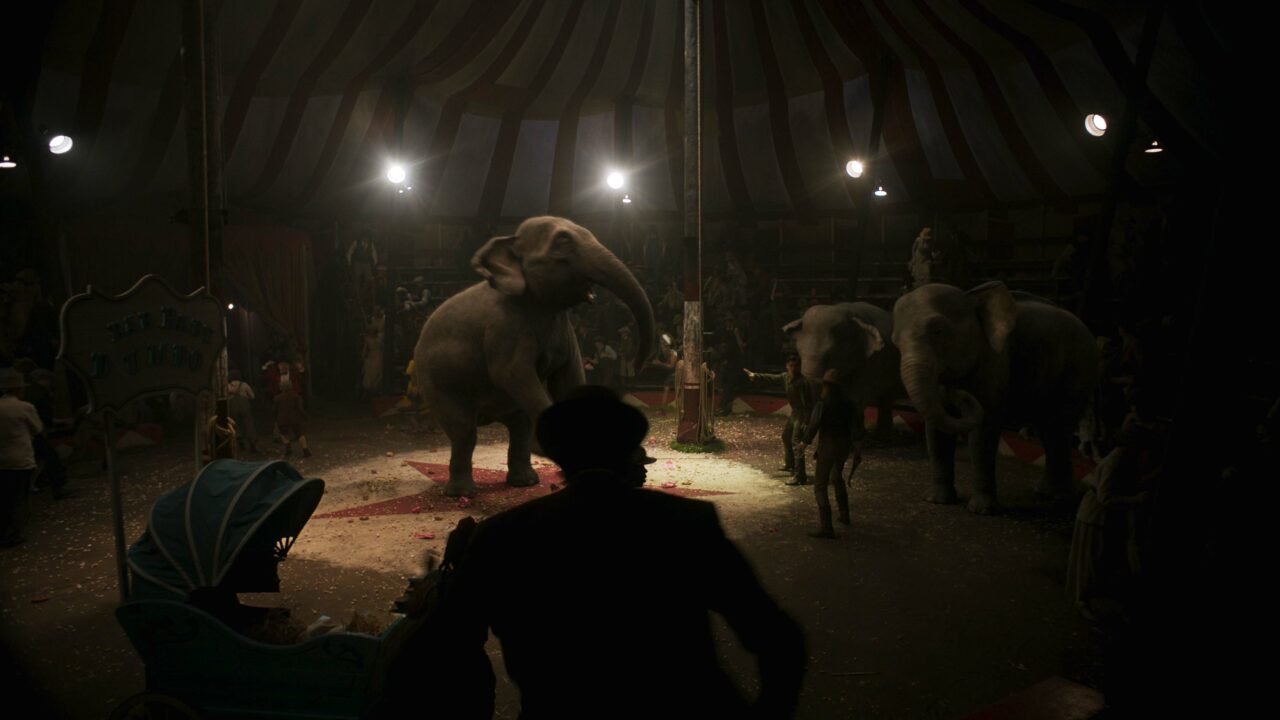 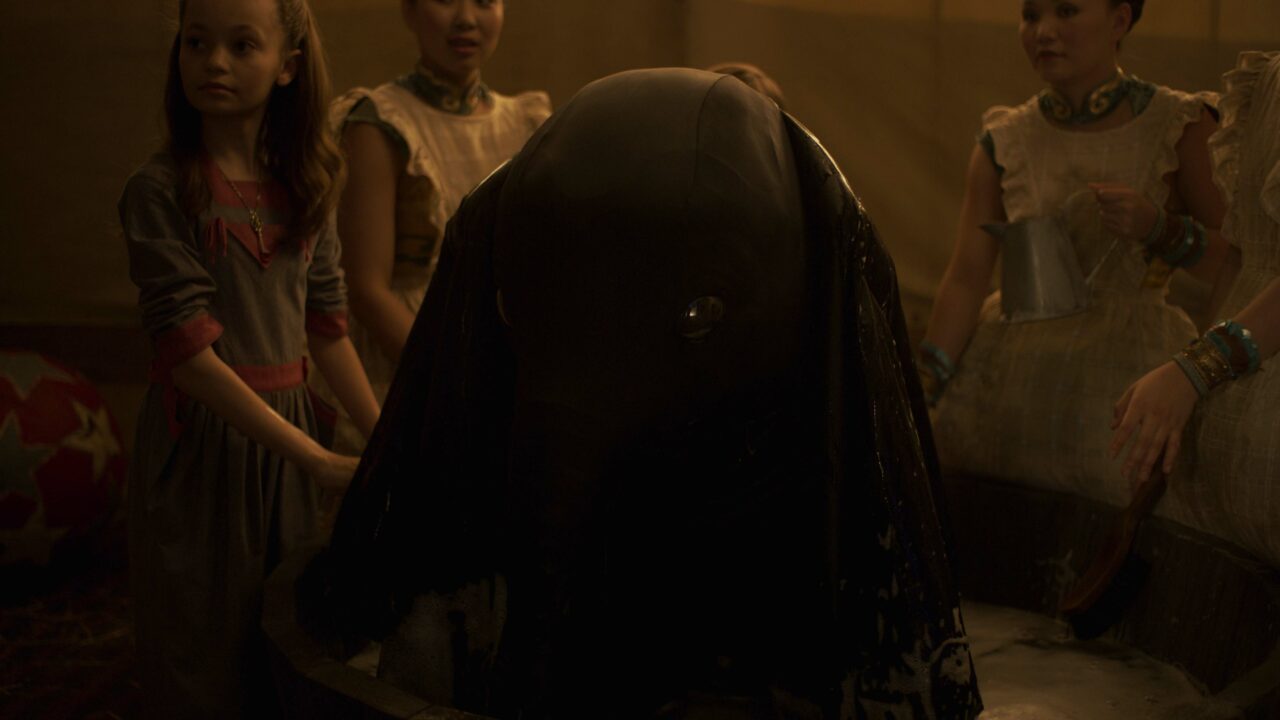 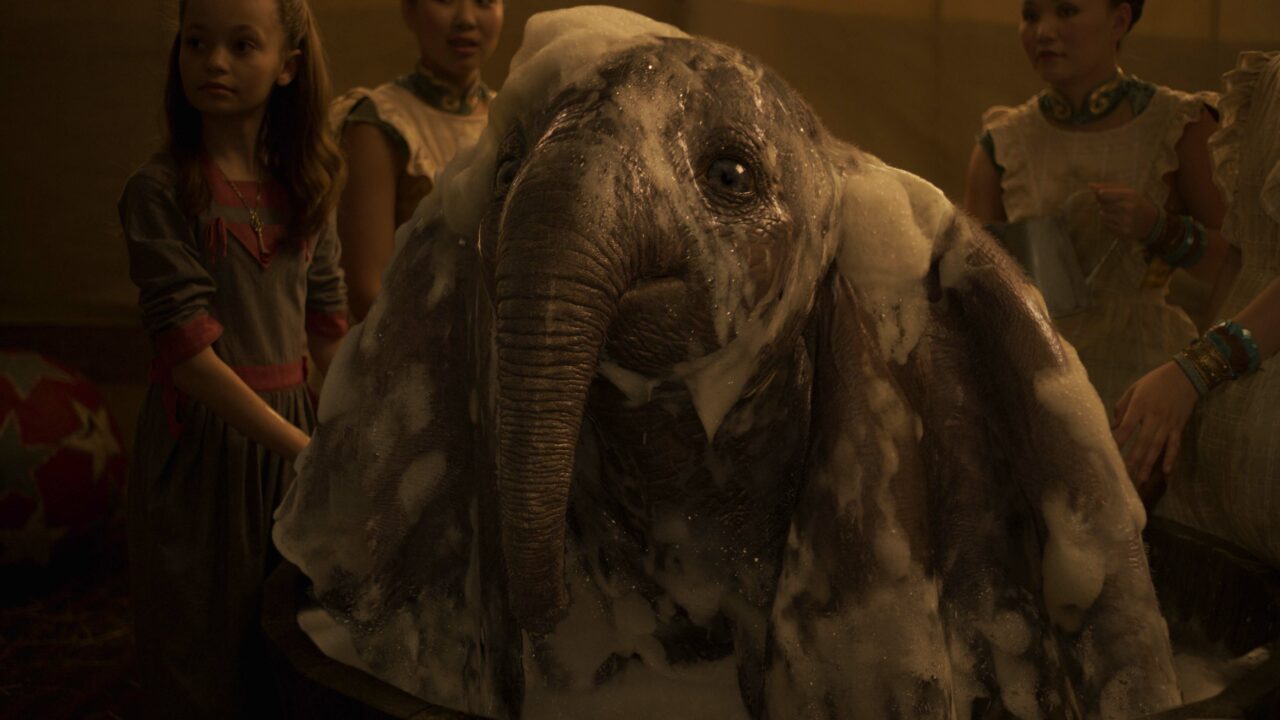 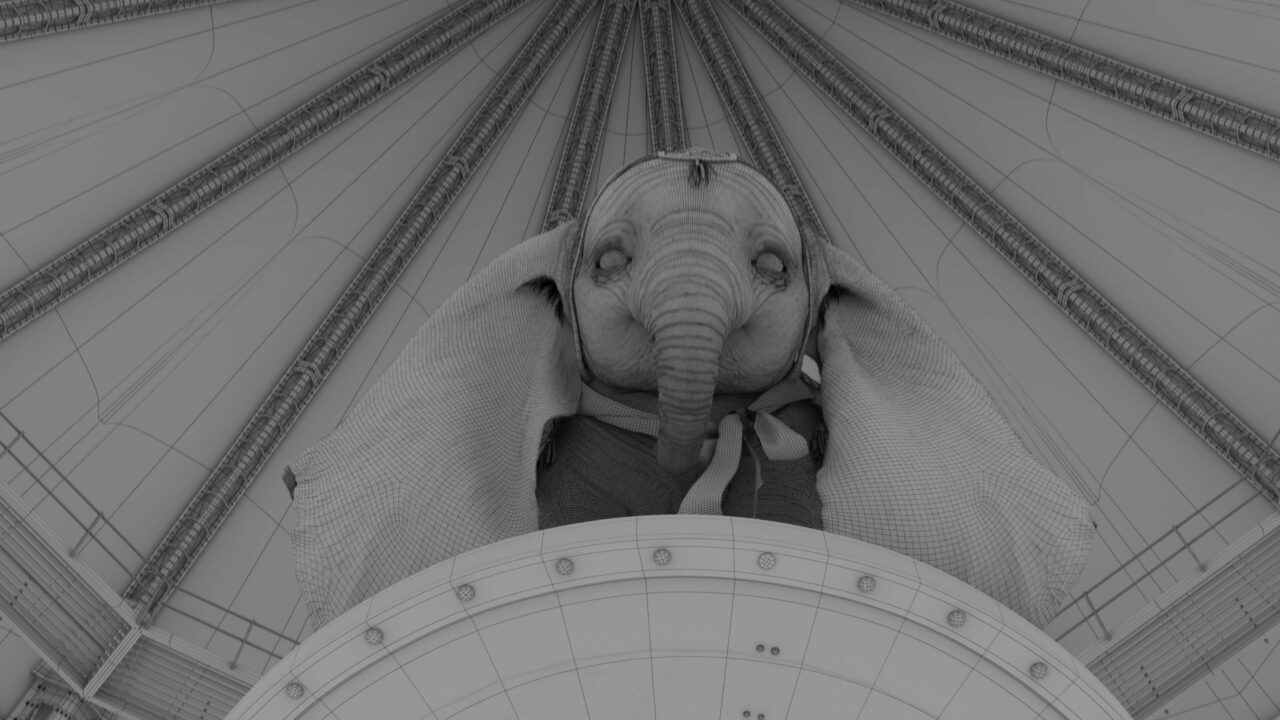 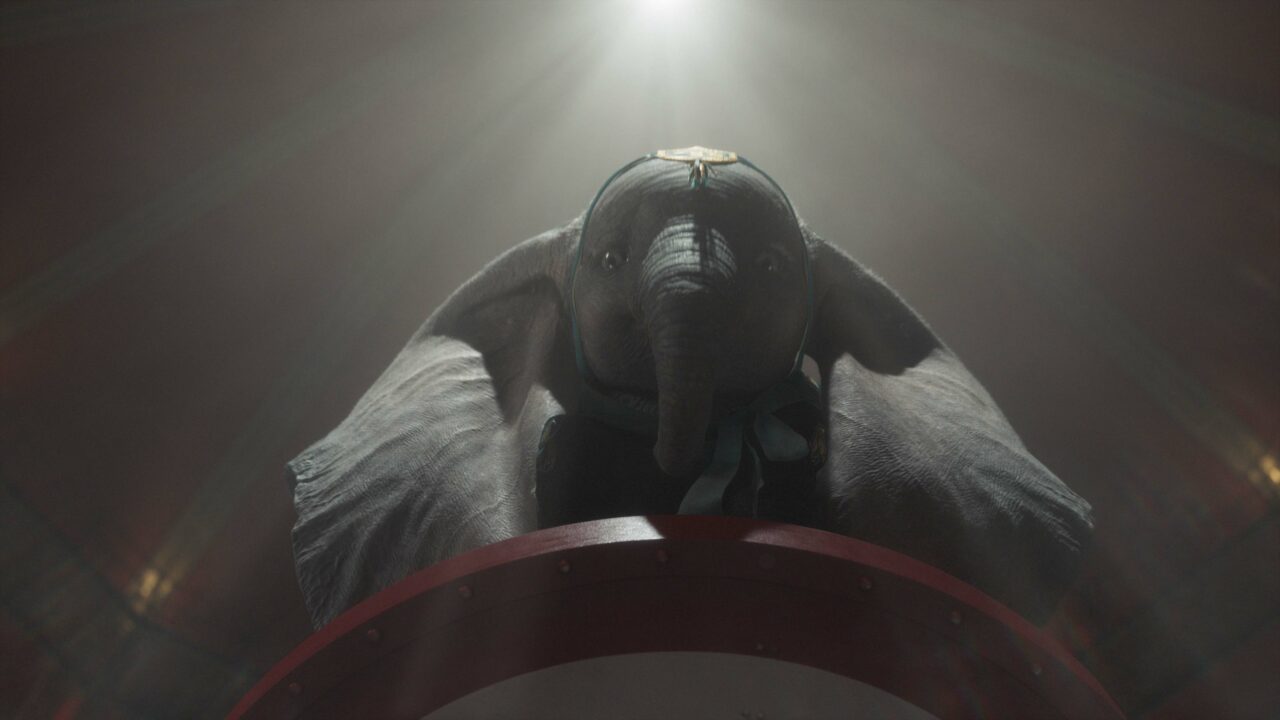 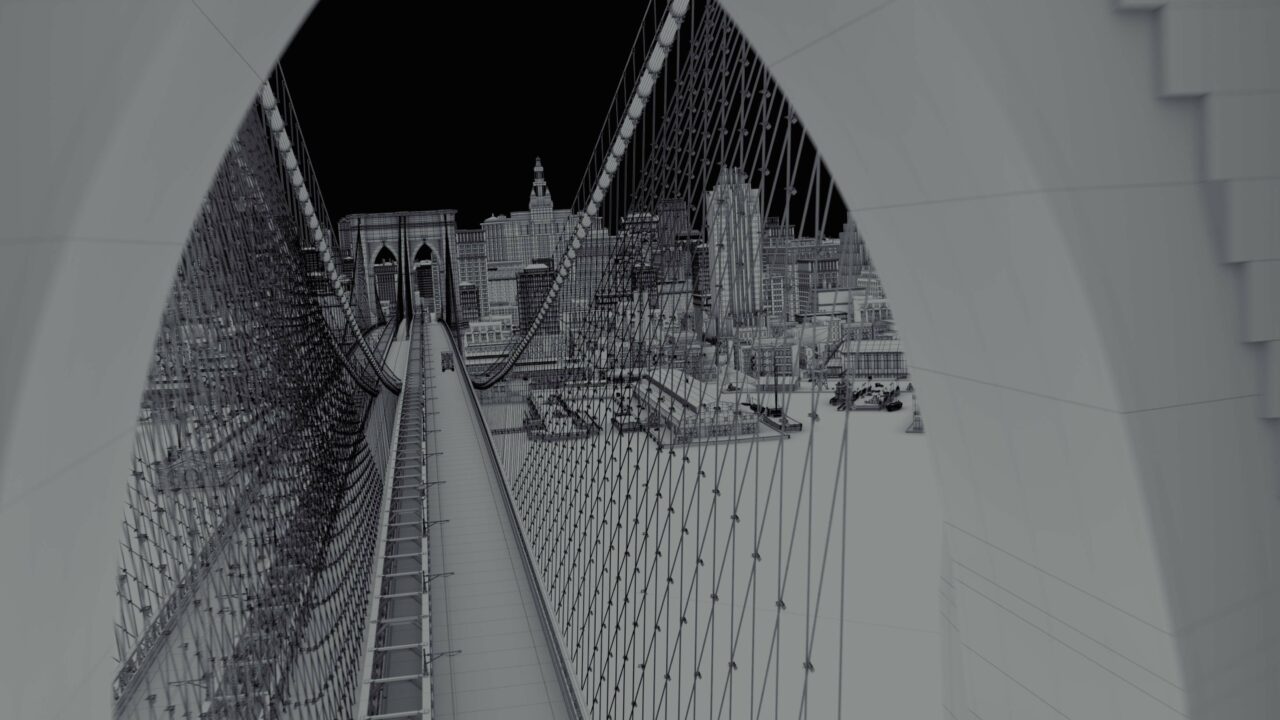 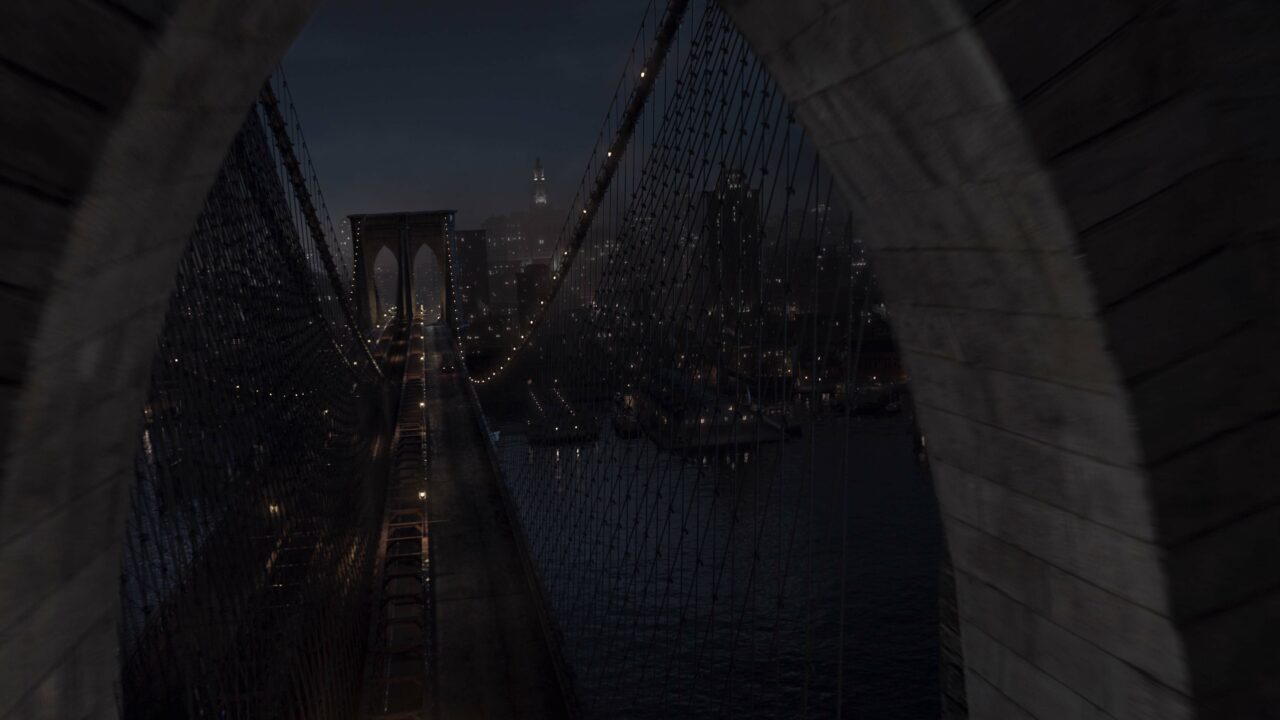 MPC also focused on environments like the Medici Bros. Circus. This required the creation of a replica of the practical circus shot on set. MPC’s Digital Environments team had to meticulously match the existing set while creating additional CG tents and trees. Most shots in the opening few scenes feature a combination of live action and CG circus. Beyond the circus, MPC created CG fields and meadows, and were also responsible for the scene in which the Big Top collapses.

MPC also created an expressionistic version of 1930s Manhattan, with the highlight being fully CG shots of Dumbo flying over Brooklyn Bridge with Joe and Milly on his back.

Given that the movie was entirely shot on sound stages, a large number of sequences required set extensions and skies. The director was heavily involved in the look of the skies in particular, with every sequence having its own mood and feel. The composition of clouds and colors became very important.

Another challenging sequence was the creation of a jungle, perhaps the most complex environment in the movie with waterfalls, trees, plants and complex water simulation and elephants. The large number of elephants was created using a combination of hand animation and MPC’s proprietary crowd software.